My interest in the drinking vessel began during graduate school.  I was attracted to clay and pottery by my desire to touch people through what I made.  To connect with people through objects that provided both a physical visually tactile experience.  The cup was at the heart of my graduate school thesis.
The cup is a visual metaphor, it is something the viewer holds and forms an intimacy with.  I want the experience of drinking from my cups to be a way of connecting and forming a relationship with the viewer.
I use porcelain clay because of its whiteness and its surface quality, both with and without glaze.  The cup is designed with idea of the handle and the vessel working together while both maintaining their individual identities.  I chose a tubular shaped handle and attach it to a soft volumetric form creating the allusion of the handle penetrating the volume.  The glazed surface enhances the form and adds to the user’s visual and tactile   experience.

In 2005, while working at the Pottery Workshop in Jingdezhen, China, I had under glaze decals made from Photo Shopped images of my incised fingerprint patterns. Upon returning from China the decals remained dormant.  I couldn’t find a use for them.  Then one day, in about 2010, I began cutting up the decals and collaging the lines and surfaces of the decals on to cylindrical cup forms and making figures influenced by imagery found on Mimbres pottery and petroglyphs 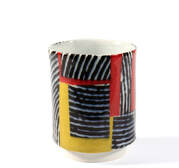 Following that I began to use cut sections of decals to create pattern on the cups.  The paper of the decal served as a resist.  Where I had not placed a decal I could paint under glaze and enhance the pattern and form with color.  I covered the cup with a clear glaze and fired it. It was my “how I AMACO” moment.
Back